Ashton and The Rothschild Family

The Rothschild family have a long association with Ashton in Northamptonshire. Here we present some random facts and anecdotes, many doubtless apocryphal and/or erroneous!

How did the Rothschild family become owners of the Ashton Estate?

Charles Rothschild (1877 – 1923) was an enthusiastic Natural Historian, and Scientist and a Merchant Banker. By repute, Charles was one of the most brilliant members of the family – and perhaps more interested in science than in banking. The Hon Charles Rothschild was in particular passionate about insects – butterflies, moths, fleas and beetles (a passion inherited by his daughter, the Hon Miriam). 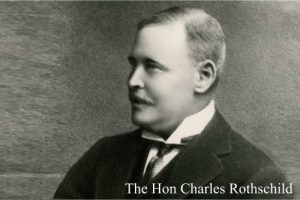 Apparently Charles was enchanted by the Ashton Woodlands, with their abundant old sallow bushes and attendant Hair-streaks – rare butterflies whose larvae feed on ancient sallow. A variety of other butterflies inhabit these magical woodlands, including Fritillaries, and, allegedly, Purple Emperors. A Lepidopterist in possession of a good fortune is in need of a natural woodland, and Charles enquired of a local inn as to the owner of the Ashton Woodlands. The “Hon NCR” was dismayed to learn that the woods were owned by a family that (so it was said) rarely sells property and rarely needs to sell property. The aspiring silviculturalist and beetle enthusiast was less dismayed to learn that the family in question was the Rothschild family, and that the (indirect) owner was his father, Nathaniel Mayer Rothschild, (who had regarded the Ashton Estate as inconsequential and hardly worthy of note, despite the fact that the Estate then included significant areas of land now sold – alas, “how are the mighty fallen!”), and how erroneous are the comments of proprietors of local hostelries, with the exception of course of the proprietor of the Chequered Skipper. The Skipper, (located in Ashton, by the Village Green, www.chequeredskipper.co.uk), an inn built (to a design attributed to William Huckvale) for Charles Rothschild, at the time perhaps the world’s most famous financier, was concerned with more important matters, such as the purchase on behalf of Queen Victoria of the Suez Canal: “Madam you have it!”

Some claim the above anecdote about Ashton is rubbish, a puff-piece, and a family myth. Nevertheless, it seems true that Charles Rothschild’s interest in Ashton focused on the flora, fauna and natural beauty of the Estate.

Bankers and Financiers, Artists and Scientists? 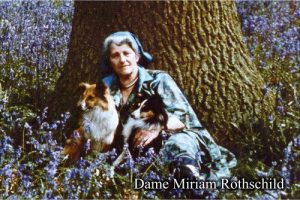 Perhaps regrettably, in terms of the physical fabric of the Ashton Estate, it is the scientific branch who have assumed the mantle of stewardship: and the scientists are not renowned for their financial prowess, or for their asset base. Among the arts and sciences branch, there has been a good run of “Firsts” from Oxford and Cambridge, and at the least – within the present generation – five first cousins who gained Oxbridge Firsts. Gaining only a “poor” First and the inability to obtain a PhD under the age of 23 seems to be the family definition of failure?! However, included amongst the members of the family with few academic qualifications are some of those with the most noteworthy academic and creative achievements. For example, the Hon Miriam (who lacked a university undergraduate degree) and the Hon Victor (who gained a rather modest degree) both became renowned scientists, and Victor and Miriam are believed to be the only brother and sister to be contemporaneous Fellows of the Royal Society.

Bankers and The Ashton Estate?

Of course, the most able members of the family have tended to become bankers, financiers and entrepreneurs: somewhat surprisingly, in view of the “clogs to clogs” dictum, several members of the present generation have proven to be very successful merchants and financiers – but that is another story, and does not concern the parochial goings-on at Ashton, a 19th Century backwater struggling to adapt to the 21st Century. The Ashton Estate is a delightful by product of the financial brilliance of the Rothschilds of the 19th Centruy. 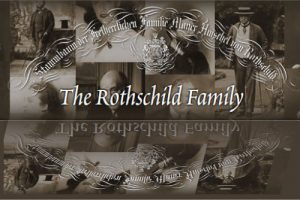 How did the Rothschild’s define a rich man? A rich man was someone who could live comfortably on the income of his income. (This dictum has since been perhaps modified to a man who can live on the income of his inflation adjusted income.) The above is a rather interesting definition, because it incorporates elements of current happiness research including the idea that feelings of wellbeing are not linearly related to the amount of riches, and vary between individuals. Thus one type of person could live happily on the income of his real income, and another more materialistic type, would require a greater income to feel comfortable. As the saying goes, “What is the good of happiness, it can’t buy you money” and many members of the Rothschild clan seemed to have married for dynastic rather than emotional reasons, marrying cousins being a favourite past-time. For who could be more eligible in terms of a dowry than a Rothschild! In fact, contrary to popular myth, the Rothschild’s were not one of the richest families in the world. Nonetheless, these Victorian entrepreneurs generated and retained sufficient riches to build country Estates of which the Ashton Estate is but one example. There are of course many more famous and more illustrious “Rothschild” Estates – see further information – in both France and in England and elsewhere in Europe.

“Fleas, Flukes and Cuckoos” and Other Parasites?

The Hon Nathaniel Charles Rothschild – the brilliant amateur scientist (1877-1923) – was very interested in fleas. Fleas are not only interesting but are also important – the Black Death (assuming it really was bubonic plague) was carried by bacteria within fleas (themselves carried on rats), and bubonic plague is still rife in certain parts of the globe. The modern day plague of Myxomatosis is carried by fleas – rabbit fleas – but transmission by this vector is restricted primarily to temperate climates. In places such as Australia, transmission is in general by another insect vector – the mosquito. The plague flea “Xenopsylla Cheopis Rothschild” is named after Charles Rothschild.

The Hon Dr Miriam (Charles’ daughter) became a parasitologist and, amongst other achievements, perhaps the world’s greatest expert on fleas – and the author of that magnum opus “The Rothschild Collection of Fleas”. The Hon Miriam wrote “Fleas Flukes and Cuckoos” for the New Naturalist Series, one of the most popular volumes in this very popular series. Each chapter begins with a witty or pithy quote, such as “has the king of Israel came out to seek a single flea” – Samuel 1, 26:20.

The Estate is owned by the Rothschild family who take a keen interest in the efficient running of the commercial operations whilst maintaining the long held family commitment to conserve the landscape and historic estate buildings.

In this video Dame Miriam Rothschild talks about herself and chooses seven of the things she finds most wonderful in nature as part of a BBC TV science series called ‘Seven Wonders of the World’, broadcast in 1995.

One newspaper seemed to enjoy lampooning the Rothschild family and entitled their article (on the collection of fleas from Russia) “Fleaing the Iron Curtain”. Another, paper of a more leftward leaning mien, had articles on “the real parasites”: the Rothschild’s themselves.

A few decades earlier, Lady Rothschild had, perhaps unwisely, embarked on litigation pursuant to her disappointment at the puppies born to her prize canine, giving rise to the obvious headline “Lord Rothschild’s Bitch in Court”.

Several members of the family have enjoyed a ready wit: however, a number of bon mots ascribed to the Rothschild’s, may not actually have been of their creation.

Further information resources on the Rothschild family are as follows:-

Ashton Wold House enjoys some flats available for rental. No member of the family lives at Ashton Wold, however prospective financiers, scientists, philanthropists and lesser mortals can enjoy the ethos of this beautifully situated country house. The latter is considerabley smaller than it was when originally constructed, but flats, such as The Renaissance Rooms, are still over 5,000 sq/ft in size.